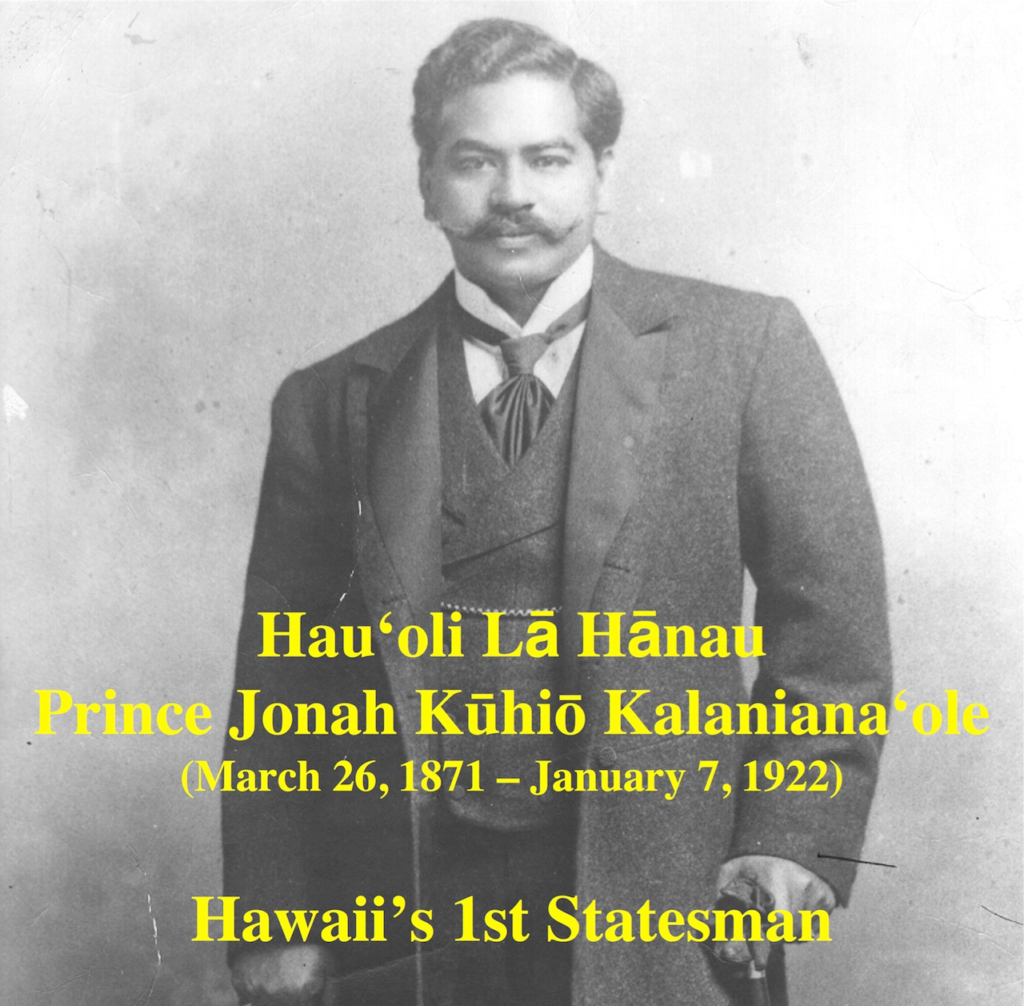 Today we celebrate the 151st birthday of Prince Jonah Kūhiō Kalanianaʻole, Hawaii’s 1st Statesman. Often called Ke Ali’i Makaainana (Prince of People), he is well known for his efforts to preserve and strengthen the Hawaiian people.

Prince Kūhiō was the first Native Hawaiian, last Prince of Hawaii and only royal-born delegate to U.S. Congress. He served as a Republican for 19 years, until his death in 1922.

During his time in office, he introduced the first bill for Hawai‘i statehood (1919) and the Hawaiian Homes Commission Act (1920). He also restored the Royal Order of Kamehameha I, established the first Hawaiian civic club, and created Hawai‘i Volcanoes National Park. Prince Kuhio foresaw the active and important role of Hawaii in the affairs of our nation and the world, which led him to lobby and obtain funds to construct Pearl Harbor.

Prince Jonah Kūhiō Kalanianaʻole Day remembers and celebrates his life and his efforts to improve people’s lives in Hawaii.  However, he also had a profound effect on his colleagues in Congress.

On Sunday, January 7, 1923, Mr. Henry A. Baldwin successor to Prince Kūhiō representing the Territory of Hawaii in Congress proposed the following resolution:

Resolved, That the business of the House be now suspended that opportunity may be given for tribute to the memory of Honorable Jonah Kūhiō Kalanianaʻole, late a Delegate to Congress from the Territory of Hawaii.

Resolved, That as a particular mark of respect to the memory of the deceased, and in recognition of his distinguished public career, the House, at the conclusion of these exercises, shall stand adjourned.

Resolved, That the Clerk communicate these resolutions to the Senate.

Resolved, That the Clerk send a copy of these resolutions to the family of the deceased.

VOLUNTEER TO BE AN ELECTION WORKER, WE NEED YOUR HELP!
HB-1567 (Bail Reform) = Get Out of Jail Free!