Volunteer to be an Election Official

Home /Archive/Volunteer to be an Election Official 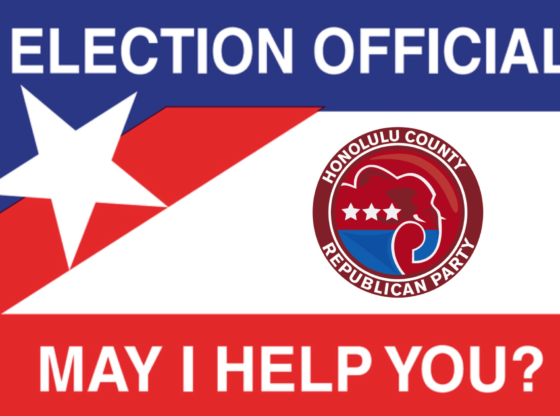 Election workers are essential to ensuring that elections are a success. With each election, hundreds of Hawaii residents dedicate themselves to sustaining the backbone of democracy – our election process. More is required than just adequate staffing at the polling place. Today’s election work force participates not only in Election Day precincts, but vote centers, early voting, absentee and early tallying boards, recount boards, and post-election audits. The Hawaii Office of Elections is looking for volunteers to support election efforts and the Hawaii Republican Party is looking for volunteers to be our eyes and ears at the voting locations in November 2018.

Political parties submit names of individuals to serve as Precinct Officials who assist voters at the polling place on Election Day. Additionally, Precinct Officials maintain the security and integrity of the election by ensuring each voter signs the poll book, controlling the issuance of ballots, and monitoring the ballot box.

There are 235 polling places staffed by 2,700 Precinct Officials statewide. Volunteers may indicate their preference of polling place, and we will work with them to schedule a training session. Each Precinct Official must attend one (1) training session in June or July. We have to submit names to the Office of Elections by April 6, 2018. HRS §11.-72.

Official Observers serve as the “eyes and ears” of the public and ensure the security and integrity of the election. These volunteers are responsible for testing and certifying the security of the vote counting system, as well as monitoring the handling of ballots at each counting center on Election Day.

There is one (1) counting center in each county. We have to submit names of four (4) individuals to represent the Hawaii Republican Party as an Official Observer to the Office of Elections by May 12, 2018. HRS §16-45.

Poll watchers observe the conduct of the election at the polling place. We may appoint one (1) poll watcher for each polling place in which we have a candidate on the ballot, which will be all 152 precincts on Oahu due to us having a Governor candidate. We have to submit the names of individuals to represent the Hawaii Republican Party as Poll Watchers to the Office of Elections for the Primary Election by August 1, 2018, and for the General Election by October 27, 2018. HRS §11-77.