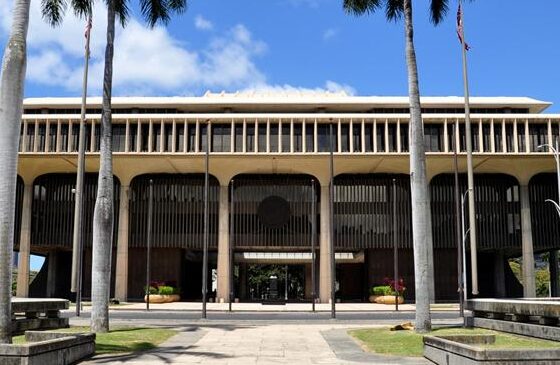 As a representative democracy, the registered voters in Hawai’i choose the people to serve as their voices in legislative government. The Hawai’i legislature is “bi-cameral” (has two chambers): the Senate (25 elected members who serve staggered four-year terms) and the House of Representatives (51 elected members who serve two-year terms). Every street address in the state is located in a particular Senate District and House District. To find your districts (and the legislators who currently represent you), visit the Legislature’s website linked below. Elections are held in even-numbered years and are overseen by the Office of Elections.

Hawaii operates with a biennial (two-year) legislative session and is considered a part-time legislature. Legislators may hold other positions of employment. The legislature convenes in Regular Session from January through late April or early May (a total of sixty session days, which excludes weekends, holidays and recess days). The rest of the year is the interim. While legislators are not in session, their offices remain open as they research issues, help constituents (people who live in their district), discuss proposals, and draft legislation.

Bills are introduced by legislators at the beginning of session; if successful, they become acts of law. Legislators may also propose resolutions and constitutional amendments. A calendar of deadlines requires legislation to move quickly through committee hearings (where lawmakers hear testimony from the public) and the mandatory readings (floor votes) in order to survive.

Both chambers establish rules governing their procedures, and organize themselves into various leadership roles and standing committees. Such roles and assignments allocate power and responsibility, and anyone attempting to influence legislation is aided by an understanding of these dynamics.

We the Powerful
City Council: When Does the Council Meet